More adventures of a pirate illustrator.

Living and working as a pirate illustrator, I can understand that I may seem intimidating and so perhaps you wouldn't think me to be the first choice for a young children's book. The opposite is true. The harsh beardy exterior, the sharp cutlasses, the bangy pistols are... well... well frankly they are frightening. So... 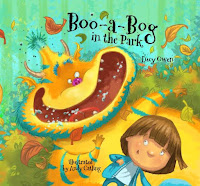 Recently I had the joy and privilege to illustrate a book written by Lucy Owen, a presenter for BBC Wales and a true piratey shipmate. Lucy had written a simple and engaging text that deals with some of the conflicting emotions and fears that most children experience. This kind of insight into the issues of childhood may be the memories of Lucy's own childhood or the understanding that she has gained from the children that she knows, but either is truly admirable. As a pirate my range of emotions are limited to 'Wow, that treasure be shiny' and 'Ow, you goatbeard! Your cutlass hurts'.
But this project is not just a book but a cause. The royalties from the sales of Boo-a-bog in the park published by Gomer go to the Noahs Ark Children's Charity.

When a text doesn't attempt to dominate the pages of a book, plentiful space is left for an illustrator to shout, sooth, explode and reassure in character, shape and colour. I had great fun doing exactly that and I hope that people will enjoy reading Boo-a-bog in the park as much. If you come from foreign parts and prefer to read Boo-a-bog in Welsh or you simply would rather not understand the book allowing it to remain a complete mystery then that option is available too. If you do prefer the latter option, you are obviously insane and qualified to join my crew.

Once the book was complete and had been duplicated by a large number of midget pirate illustrators, Gomer asked if I would attend the Boo-a-bog in the park book launch which would take place at the Noah's Ark children's hospital in Cardiff. My pirate ship was in dry dock for caulking so another mode of transport would be needed. I decided on the Landlubbers railway system. Apparently, from the south coast of England a train will travel directly to Cardiff, no changes. What happened to London? I'm not complaining but I thought that all trains went through London. If I so much as nipped to the local Coop for some teabags, then I'm sure that London would be involved somewhere. Did London leave when it heard about Brexit? Is it on the continent pretending to be the capitol of Belgium? Who knows. 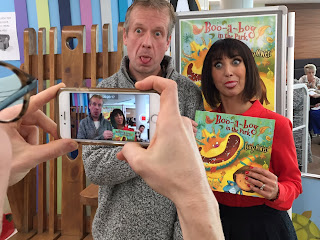 The book launch was a fantastic event and I was able to meet all involved with this great project. Lucy, her husband Rhodri and son Gabriel were all wonderful as was everyone else that I met there who came to support the launch. Noahs Ark Children's hospital was an outstanding achievement of fundraising by the charity and I had the delight of meeting some of those that are benefiting as well as those amazing people that work at the hospital. The event was a great success and fun was had by all with much book signing, TV interviews etc etc.

The adventures of a pirate illustrator

Living and working as a pirate illustrator is a fine thing indeed. There's the life on the Spanish Main, the bags of cutlasses, the doubloons, drawing, painting. Some might timidly suggest that not everything about my career is entirely true. I do draw and paint so there is an end to it!

My cutlasses and pencils are sharp and my pistols and brushes loaded ready for whatever project I wish to pursue, cannonade and board. A recent project was a series of books that came under the collective title of Igor's Lab of Fear. 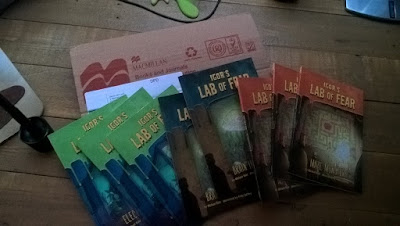 Igor's Lab of Fear is a series of books of which I was given the job of illustrating the final four. The previous illustrator was unavailable but had managed to illustrate the covers so my brief was to produce the internal illustrations. My contact at the Publisher was a lovely ent

husiastic lady shipmate who was very encouraging and offered just the right amount of brief with plenty of freedom. It made a change to have a project where I was not warned against scaring the children but instead encouraged to do so. A fine thing for a pirate! The illustrations were all to be black and white and the creepier the better. I thoroughly enjoyed myself with evil creatures and disconcerting compositions but three books along and communication with the lady shipmate at the publisher went rather quiet. She had promised to send the manuscript for the fourth book but time passed and nothing came. It's at times like this that a pirate illustrator has to think about tides and sailing times. Another project was looming and my porthole of opportunity getting smaller. Eventually I was contacted by someone from the publisher who was sending through the brief and asking when I would be able to complete. Well, time had run out and I was now sailing a different sea. I had to explain the situation and hopefully they understood that despite being a pirate it was none of my piratey escapades that was at fault here. But what happened to my lovely shipmate at the publishing house? Did she move on to new

horizons or was she a victim of the stories? I figure that most stories in books are based on truth and those involved in the production of scary stories are going to be facing the dangers that those stories tell of. Being a fearsome pirate illustrator, I face these dangers and emerge with barely a scratch but some poor souls are lost. Perhaps people should stick to writing pleasant costume dramas with afternoon tea and doyleys. It's much safer.
Posted by Unknown at 07:06 No comments:


So, what am I doing.Well. among other projects I am working for a US publisher on a series of creepy freaky books. That's not what they are called but I have no idea how much I am allowed to say pre-publication so I'll remain enigmatic. 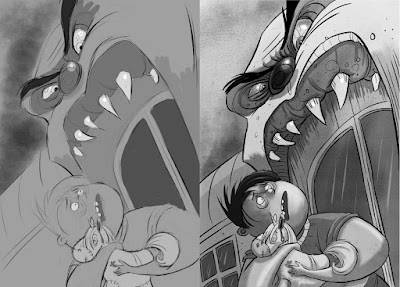 Shown here are the pencil roughs and the final ink versions. 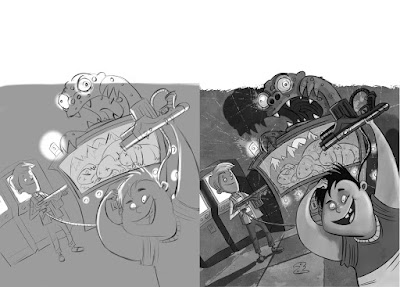 This project is proving a particular favourite of mine. The freedom of the briefs allow my inner geek (some might say that it's not very `inner') to run wild. There are of course more illustrations in the books than I am showing here, otherwise they would be stupidly short books but trust me, my inner geek has stripped naked, screamed pathetically and run head-on into the full potential of this project.

Over the years I have produced many, many pieces of artwork for various papery publications and I thought it time to make it all available for peepers everywhere. You can click the above slideshow or follow this link. Take a look and I'm sure that something in there will make the effort of clicking worthwhile. Clicky clicky.
Posted by Unknown at 06:00 No comments:

Wooa, hold dem horses! Two posts in one day. Well, when those samples are in and the next project hasn't begun, it's time to breath. In......hold....and out. (Cough)  Thought I had better show another set of character designs. 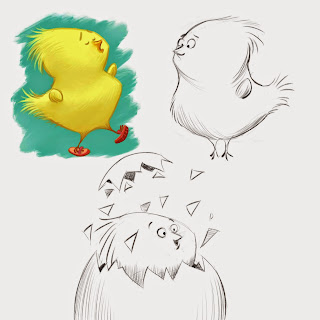 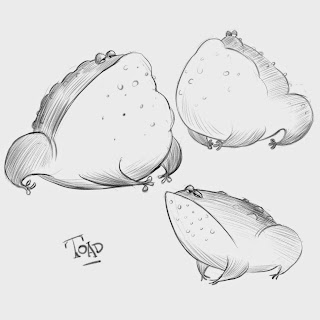 Here are some recent character designs for a chapter book project. I have no idea if I will get to illustrate this one. They look good to me but everyone has their own idea as to what is right for a project. The writing is very good which always helps when it comes to illustrating.
I'm sure that once upon a time people used to meet in person to talk about such projects but now it is mostly email. It is so hard to read into what it is that the commissioner might see in your work and to get a full understanding of what is expected. So decision making becomes a daunting prospect when approaching the design of story characters. Which is the right avenue for this project? I think that what it comes down to in the end is, do what you do and hope for the best. 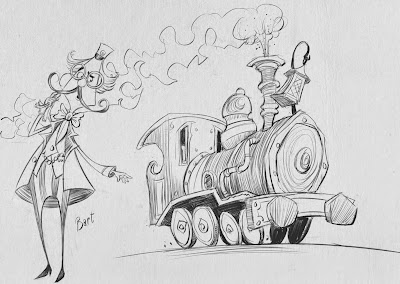 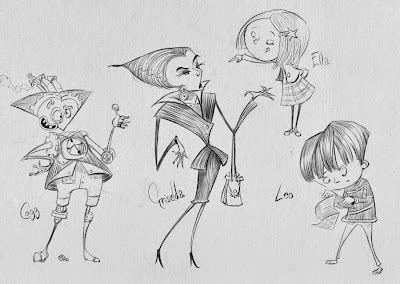 I have been very busy and the work is still pouring in but I managed to sneak this one into a few in-between moments. When on auto I tend to default to my best favourite thing. 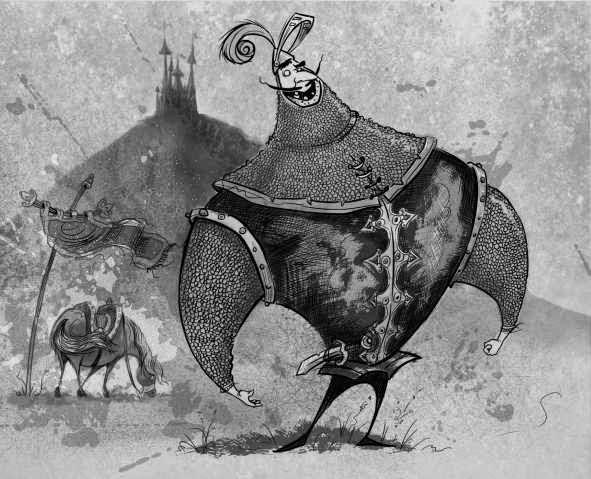