To fluff or not to fluff.

In the past I have made attempts at creating illustrations of the soft and fluffy animal type. My problem has always been an inability to do cute. I suppose that I must have progressed through art college with high ideals and a head full of radical noises. The idea of doing cute n' fluffy would have had me running for the gag bag. Since having kids I have mellowed and decided not to conquer the world of illustration. Instead, I will conquer the technique of cute. My first attempt involved a couple of mice doing something vaguely amusing. I sent it to my agent for feedback and later the phone rang and the response was short and sweet, "...but they're rats!" he said in a tone of incredulity. So much for my debut.

I have made some vague attempts since but now it is time again, the season of fluff has returned and the god of Mousey Nutkin must be appeased.
The illustration below is my latest attempt and I think I'm starting to get somewhere. 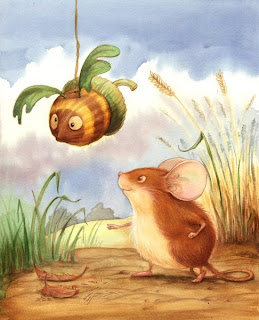